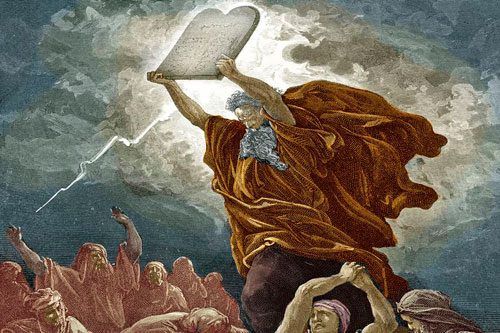 18.1. When Jethro, the priest of Midian, Moses’ father-in-law, heard of all that God had done for Moses and for Israel His people, that the LORD* had brought Israel out of Egypt, 2. then Jethro, Moses’ father-in-law, took Zipporah, Moses’ wife, after Moses had sent her back, 3. and her two sons, of whom the name of the one was Gershom, for he said, “I have been an alien in a strange land,” 4. and the name of the other was Eliezer, “For the God of my father was my help and delivered me from the sword of Pharaoh.” 18:5. And Jethro, Moses’ father-in-law, came with his sons and his wife to Moses in the wilderness, where he camped at the mountain of God 6. and he said to Moses, “I, your father-in-law Jethro, come to you with your wife and her two sons with her.”

18:7. And Moses went out to meet his father-in-law and paid homage and kissed him. And they asked each other of their welfare, and they came into the tent. 8. And Moses told his father-in-law all that the LORD* had done to Pharaoh and to the Egyptians for Israel’s sake, all the travail that had come upon them on the way, and how the LORD* delivered them. 9. And Jethro rejoiced for all the goodness which the LORD* had done for Israel, whom He had delivered out of the hand of the Egyptians.

18:10. And Jethro said, “Blessed be the LORD*, Who has delivered you out of the hand of the Egyptians and out of the hand of Pharaoh, Who has delivered the people from under the hand of the Egyptians. 11. Now I know that the LORD* is greater than all gods, for in the thing in which they, Egyptians, acted presumptuously against them, Israel.” 12. And Jethro, Moses’ father-in-law, took a burnt offering and sacrifices for God, and Aaron and all the elders of Israel came with Moses’ father-in-law to eat a meal before God.

18:13. And it happened the next day that Moses sat to judge the people and the people stood by Moses from the morning to the evening. 14. And when Moses’ father-in-law saw all that he did for the people he said, “What is this thing that you are doing for the people? Why do only you yourself sit and all the people stand by you from morning to evening?” 15. And Moses said to his father-in-law, “Because the people came to me to inquire of God. 16. When they have a matter, they come to me and I judge between one and another and I make known the statutes of God and His Teachings.”

18:17. And Moses’ father-in-law said to him, “What you are doing is not good. 18. You will surely wear away, both you and this people that is with you, for this thing is too heavy for you. You are not able to perform it yourself alone. 19. Listen now to my voice! I shall give you counsel and God will be with you. You are an agent for the people to God, so you can bring the causes to God. 20. And you will teach them ordinances and Torah (Teaching) and will show them the Way in which they must walk and the work that they must do. 21. Moreover you will provide out of all the people able men, such as revere God, men of truth, hating unjust gain, and place such over them, to be rulers of thousands, rulers of hundreds, rulers of fifties, and rulers of tens. 22. And let them judge the people at all seasons. And it will be, every great matter they will bring to you, but every small matter they will judge, so it will be easier for you, yourself, and they will bear the burden with you. 23. If you will do this thing and God commands you so, then you will be able to endure and all the people will also go to their place in peace.”

18:24. So Moses listened to the voice of his father-in-law and did all that he had said. 25. And Moses chose able men out of all Israel and made them heads over the people, rulers of thousands, rulers of hundreds, rulers of fifties, and rulers of tens. 26. And they judged the people at all seasons, bringing the hard cases to Moses, but every small matter they judged themselves.

18:27. And Moses let his father-in-law depart, and he went his way into his own land.

19.1. In the third month, after the children of Israel had gone forth out of the land of Egypt, that same day they came into the wilderness of Sinai. 2. For they had left Refidim and had come to the desert of Sinai and pitched in the wilderness. And Israel camped there before the mountain. 3. And Moses went up to God. And the LORD* called to him out of the mountain saying, “Thus will you say to the House of Jacob and tell the children of Israel. 4. You have seen what I did to the Egyptians, how I bore you on eagles’ wings, and brought you to Myself. 5. Now therefore, if you will indeed obey My voice and keep My covenant, then you will be a peculiar treasure to Me above all people, for all the earth is Mine. 6. And you will be a kingdom of priests to Me and a holy nation. (Isa. 61:6, 1 Pe. 2:5, Rev. 1:6; 5:10; 20:6. See Ezek. 20:37) These are the words which you will speak to the children of Israel.”

19:7. And Moses came and called for the elders of the people and laid before them all these words which the LORD* commanded him. 8. And all the people answered together and said, “All that the LORD* has spoken we will do.”

19:16. And it was on the third day in the morning that there were thunders and lightnings (Rev. 4:5) and a thick cloud upon the mountain, and the sound of the shofar was exceedingly loud, so that all the people in the camp trembled. 17. And Moses brought the people out of the camp to meet with God and they stood at the base of the mountain. 18. And Mount Sinai was altogether in smoke, because the LORD* descended upon it in fire and its smoke ascended like the smoke of a furnace, and the whole mountain quaked greatly. (Rev. 9:2; 11:19) 19. And when the sound of the shofar sounded long and grew louder and louder, Moses spoke and God answered him audibly. 20. And the LORD* came down upon Mount Sinai, on the top of the mountain and the LORD* called Moses up to the top of the mountain, and Moses went up. (Rev. 4:1)

19:21. And the LORD* said to Moses, “Go down, charge the people lest they break through to the LORD* to gaze and many of them perish. 22. And let the priests also who come near to the LORD* sanctify themselves lest the LORD* break forth upon them.”

19:23. And Moses said to the LORD*, “The people cannot come up to Mount Sinai, for You charged us saying, Set bounds about the mountain and sanctify it.”

19:24. And the LORD* said to him, “Go! Get yourself down! Then you will come up, you and Aaron with you, but do not let the priests and the people break through to come up to the LORD*, lest He break forth upon them.” 25. So Moses went down to the people and spoke to them.

20.1. And God spoke all these words saying, 2. “I AM the LORD* your God Who has brought you out of the land of Egypt, out of the house of bondage. 3. You will have no other gods before Me. 4. You will not make any graven image for yourself, or any likeness of anything that is in heaven above, or that is in the earth beneath, or that is in the water under the earth. 5. You will not bow down yourself to them, or serve them, for I AM the LORD* your God, a jealous God, visiting the iniquity of the fathers upon the children to the third and fourth generation of those who hate Me, 6. and showing loving kindness to thousands of those who love Me and keep My commandments.

20:7. “You will not take the name of the LORD* your God in vain, for the LORD* will not hold him guiltless who takes His name in vain.

20:8. “Remember the Sabbath, to keep it holy. 9. You will labor six days and do all your work, 10. but the seventh day is the Sabbath of the LORD* your God, you will not do any work, you or your son or your daughter, your manservant or your maidservant or your cattle or your stranger who is within your gates. 11. For in six days the LORD* made heaven and earth, the sea, and all that is in them and He rested the seventh day, therefore the LORD* blessed the Sabbath and sanctified it. (Rev. 10:6; 14:7)

20:15. And all the people saw the thunderings and the lightnings, and the noise of the shofar, and the mountain smoking. And when the people saw it, they stood afar off. 16. And they said to Moses, “Speak with us and we will hear, but do not let God speak with us, lest we die.” 17. And Moses said to the people. “Do not be in awe! God has come to prove you, and that His awe may be before your faces, so that you will not sin.” 18. And the people stood afar off, and Moses drew near to the thick darkness where God was.

20:19. And the LORD* said to Moses, “Say this to the children of Israel; You have seen that I have talked with you from heaven. 20. You will not make images with Me, gods of silver, neither will you make gods of gold for yourselves. 21. You will make an altar of earth for Me and will sacrifice your burnt offerings on it, your peace offerings, your sheep and your oxen. In all places where I record My name I shall come to you and I shall bless you. 22. And if you will make Me an altar of stone, you will not build it of hewn stone, for if you lift up your tool upon it, you have polluted it. 23. Neither will you go up by steps to My altar, so that your nakedness will not be discovered on it.”