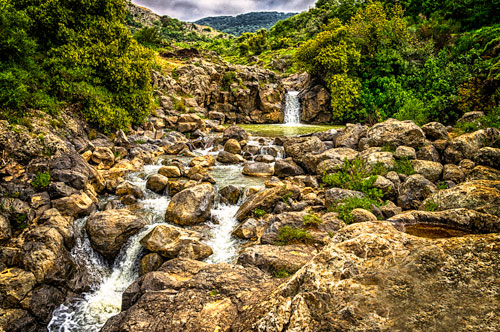 33.1. And this is the blessing with which Moses the man of God blessed the children of Israel before his death. 2. And he said, “The LORD* came from Sinai and rose up from Seir for them. He shined forth from Mount Paran and He came with ten thousand holy ones. (Jude 14) A waterfall came for them from His right hand. 3. He also loved the people. All His saints are in your hand and they were prostrate at your feet. Everyone will receive from your words. 4. Moses commanded us a Torah, the inheritance of the congregation of Jacob. 5. And he was king in Jeshurun when the heads of the people and the tribes of Israel were gathered together.

33:6. “Reuben will live and not die, but his men will be few. 7. And this is for Judah: and he said, Listen, LORD*, to the voice of Judah and bring him to his people. Let his hands be sufficient for him and You be a help from his enemies. 8. And of Levi he said, Let Your Thummim and Your Urim be with Your holy one, whom You did prove at Massah, with whom You strove at the waters of Meribah, 9. who said to his father and to his mother, I have not seen him. Neither did he acknowledge his brothers, nor did he know his own children, for they have observed Your word and kept Your covenant. 10. They will teach Jacob Your judgments and Israel Your Torah. They will put incense before You and whole burnt sacrifice upon Your altar. 11. LORD*, bless his substance and accept the work of his hands. Strike through the loins of those who rise against him and of those who hate him, so they could not rise again.”

33:18. And of Zebulun he said, “Rejoice, Zebulun, in your going out and, Issachar, in your tents. 19. They will call peoples to the mountain. There they will sacrifice sacrifices of righteousness, for they will draw the abundance of the seas and treasures hidden in the sand.”

33:20. And of Gad he said, “Blessed is he who enlarges Gad. He lives like a lion and tears the arm with the crown of the head. 21. And he provided the first part for himself because there the chief’s portion was hidden, and he came with the heads of the people. He executed the acts of loving kindness of the LORD* and his judgments with Israel.”

33:23. And of Naphtali he said, “O Naphtali, satisfied with favor and full with the blessing of the LORD*. You possess the west and the south.”

33:24. And of Asher he said, “Let Asher be blessed with children. Let him be acceptable to his brothers and let him dip his foot in oil. 25. Your bolts will be iron and bronze, and like your days, so will your strength be.”

33:26. “There is none like the God of Jeshurun, Who rides upon the heavens to help you and in His excellency on the skies.

33:27. “The eternal God is a refuge and underneath are the everlasting arms, and He will thrust out the enemy from before you and will say, “Destroy.” 28. Israel then will live in safety alone. The fountain of Jacob will be on a land of grain and wine. Also, His heavens will drop down dew. 29. Happy are you, O Israel! Who is like you, O people saved by the LORD*, the Shield of your Help and Who is the sword of your excellency! And your enemies will be servile to you, and you will tread upon their high places.”

34.1. And Moses went up from the plains of Moab to the mountain of Nebo, to the top of Pisgah that is opposite Jericho. And the LORD* showed him all the land of Gilead, to Dan, 2. and all Naphtali and the land of Ephraim and Manasseh, and all the land of Judah to the utmost sea, 3. and the south and the plain of the valley of Jericho, the city of palm trees, to Zoar. 4. And the LORD* said to him, “This is the land which I swore to Abraham, to Isaac, and to Jacob saying, I shall give it to your seed. I have caused you to see with your eyes, but you will not go over there.”

34:5. So Moses the servant of the LORD* died there in the land of Moab, according to the word of the LORD*. 6. And He buried him in a valley in the land of Moab, opposite Beit-Peor, but no man knows of his grave to this day. 7. And Moses was a hundred twenty years old when he died. His eye was not dim, nor his vigor abated. 8. And the children of Israel wept for Moses in the plains of Moab thirty days: so the days of weeping and mourning for Moses were ended.

34:9. And Joshua the son of Nun was full of the spirit of wisdom, for Moses had laid his hands upon him. And the children of Israel hearkened to him and did as the LORD* commanded Moses.

34:10. And in Israel there has not risen a prophet since like Moses, whom the LORD* knew face to face, 11. in all the signs and the wonders, which the LORD* sent him to do in the land of Egypt to Pharaoh, to all His servants, to all His land, 12. in all that mighty hand, and in all the great awe which Moses showed in the sight of all Israel.