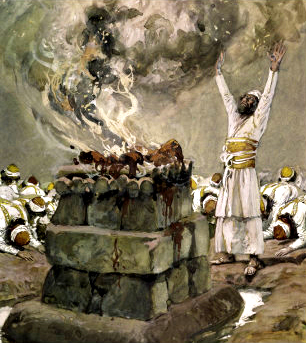 The LORD to Appear 9.1. And it happened on the eighth day that Moses called Aaron and his sons and the elders of Israel. 2. And he said to Aaron, “Take for yourself a young calf for a sin offering and a ram without blemish for a burnt offering and offer them before the LORD*. 3. And to the children of Israel you will speak saying, Take for yourselves a he goat for a sin offering and a calf and a lamb, both of the first year, without blemish, for a burnt offering, 4. also a bull and a ram for peace offerings, to sacrifice before the LORD* and a grain offering mixed with oil, for today the LORD* will appear to you.”

9:5. And they brought what Moses commanded before the Tent of Meeting and the whole congregation drew near and stood before the LORD*. 6. And Moses said, “This is the thing that the LORD* commanded that you should do and the glory of the LORD* will appear to you.”

9:7. And Moses said to Aaron, “Go to the altar and offer your sin offering and your burnt offering, and make atonement for yourself and for the people: and offer the offering of the people and make atonement for them, as the LORD* commanded.” 8. Aaron therefore went to the altar and slew the calf of the sin offering, which was for himself. 9. And the sons of Aaron brought the blood to him and he dipped his finger in the blood, and put it on the horns of the altar, and poured out the blood at the bottom of the altar, 10. but the fat, the kidneys, and the lobe above the liver of the sin offering, he burned upon the altar, as the LORD* commanded Moses. 11. And the flesh and the hide he burned with fire outside the camp. 12. And he slew the burnt offering and Aaron’s sons presented the blood to him, which he sprinkled all around on the altar. 13. And they presented the burnt offering to him, with the pieces of it and the head, and he burned them on the altar. 14. And he washed the innards and the legs and burned them on the burnt offering on the altar.

9:23. And Moses and Aaron went in the Tent of Meeting, and came out and blessed the people, then the glory of the LORD* appeared to all the people. 24. And a fire came out from before the LORD* and consumed the burnt offering and the fat on the altar and all the people saw it, and they shouted and fell on their faces.

10.1. And Nadab and Abihu, the sons of Aaron, each of them took his fire-pan and put fire in it and put incense on it, and offered strange fire before the LORD*, which He commanded them not to do. 2. And fire went out from the LORD* and devoured them, and they died before the LORD*. 3. Then Moses said to Aaron, This is what the LORD* said, saying, “I shall be sanctified through those who come near Me, and I shall be honored before all the people.” And Aaron held his peace.

10:4. And Moses called Mishael and Elzaphan, the sons of Aaron’s uncle Uzziel and said to them, “Come near, carry your brothers out of the camp from in front of the Sanctuary.” 5. So they went near and carried them in their tunics out of the camp, as Moses had said.

10:6. And Moses said to Aaron and to Elazar and to Itamar, his sons, “Do not uncover your heads or tear your clothes, lest you die and lest wrath come upon all the people, but let your brothers, the whole House of Israel, bewail the burning which the LORD* has kindled. 7. And you will not go out from the door of the Tent of Meeting, lest you die, for the anointing oil of the LORD* is upon you.” And they did according to the word of Moses.

10:8. And the LORD* spoke to Aaron saying, 9. “Do not drink wine or strong drink, you or your sons with you, when you go into the Tent of Meeting, lest you die! It will be a statute forever throughout your generations, 10. so you can put a difference between holy and unholy and between unclean and clean 11. and so you can teach the children of Israel all the statutes which the LORD* has spoken to them by the hand of Moses.”

10:16. And Moses diligently sought the goat of the sin offering and, behold, it had already been burned; and he was angry with Elazar and Itamar, the sons of Aaron who were left alive saying, 17. Why have you not eaten the sin offering in the Holy Place, seeing it is most holy, and God has given it to you to bear the iniquity of the congregation, to make atonement for them before the LORD*? 18. Behold, its blood was not brought in within the Holy Place. You should indeed have eaten it in the Holy Place, as I commanded.”

10:19. And Aaron said to Moses, “See, they have today offered their sin offering and their burnt offering before the LORD* and such things have befallen me, and if I had eaten the sin offering today, would it have been accepted in the LORD’s* sight?” 20. And Moses listened and it was well pleasing in his sight.