Heroines of the Bible: Rebeccah 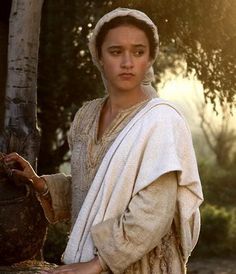 Rebeccah respected the Word of the Lord when He told her there were twins in her womb. The LORD* then went on to say the elder, Esau, would serve the younger, Jacob. That prompted her to coax Jacob to imitate Esau. Rebeccah waited twenty years after marrying Isaac to have these babies.

Genesis 20:20. And Isaac was forty years old when he took Rebeccah to wife, the daughter of Bethuel the Syrian of Padanaram, the sister of Laban the Syrian. 21. And Isaac entreated the LORD* for his wife, because she was barren, and the LORD* was entreated by him and Rebeccah his wife conceived. 22. And the children struggled together within her and she said, “If it is so, why am I like this?” And she went to inquire of the LORD*. 23. And the LORD* said to her, “Two nations are in your womb and two kinds of people will be separated from your body, and the one people will be stronger than the other people and the elder will serve the younger.”

They were married twenty years when Isaac prayed for Rebeccah to get pregnant, so he was sixty years old when she became pregnant. Rebecca was a heroine because of her going to get married, traveling a great distance to marry a man she did not know, showing a very trusting heart, then waiting so long for children. When the boys were over seventy years old she overheard Isaac telling Esau that he would give Esau his blessing when Esau would bring him some venison.

Genesis 27.1. And it was that when Isaac was old and his eyes were dim, so that he could not see, he called Esau his eldest son and said to him, “My son.” And he said to him, “Here I am.” 2. And he said, “Behold now, I am old, I do not know the day of my death. 3. Now take, I beg you, your weapons, your quiver and your bow and go out to the field and take me some venison. 4. And make me savory meat, such as I love and bring it to me, so I can eat, so I can bless you before I die.” 5. But Rebeccah heard when Isaac spoke to Esau his son. And Esau went to the field to hunt for venison and to bring it.

Genesis 27:6. And Rebeccah spoke to Jacob her son saying, “Behold, I heard your father speak to Esau your brother saying, 7. ‘Bring me venison and make me savory meat, so I may eat and bless you before the LORD* before my death.’ 8. So now, my son, obey my voice according to that which I command you. 9. Go now to the flock and fetch me from there two good kids of the goats, and I shall make savory meat for your father, such as he loves. 10. And you will bring it to your father, so he may eat and so he can bless you before his death.”

Remembering the LORD*’s statement to her that the elder would serve the younger, Rebeccah engineered the deception of Isaac so Jacob would get Isaac’s blessing. That made Rebeccah a true Heroine.