Heroines of the Bible – Jochebed 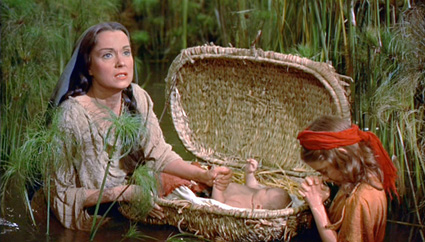 Exodus 2.1. And there went a man from the house of Levi and took a daughter of Levi for a wife. 2. And the woman conceived and bore a son and when she saw that he was a goodly child, she hid him for three months. 3. Then when she could no longer hide him, she took a box made of bulrushes for him and daubed it with slime and with pitch, and put the child in it, and she laid it in the reeds by the river’s bank. 4. And his sister stood far off, to know what would be done to him. 5. And the daughter of Pharaoh came down to wash in the river, and her maidens walked along by the river’s side. And, when she saw the box among the reeds, she sent her maid to fetch it. 6. And when she had opened it, she saw the child and, behold, the baby was crying. And she had compassion on him and said, “This is one of the Hebrews’ children.” 7. Then his sister said to Pharaoh’s daughter, “Shall I go and call a nurse of the Hebrew women for you, so she can nurse the child for you?” 8. And Pharaoh’s daughter said to her, “Go.” And the maid went and called the child’s mother. 9. And Pharaoh’s daughter said to her, “Take this child away, and nurse him for me and I shall give you your wages.” And the woman took the child and nursed him. 10. And the child grew and she brought him to Pharaoh’s daughter, and he became her son. And she called his name Moses (Moshe). And she said, “Because I drew him out of the water.”

Exodus 6:20. And Amram took Jochebed (Yokheved), his father’s sister, for his wife and she bore him Aaron and Moses: and the years of the life of Amram were a hundred thirty-seven years.

Jochebed nursed and nurtured Moses for several years, imparting to him his Jewish roots so that when he was grown he knew his heritage, acting forcefully when he saw one of his people being mistreated. That impartation made Jochebed a Heroine.