Bible Myth #5: The Ark was carried for all to see 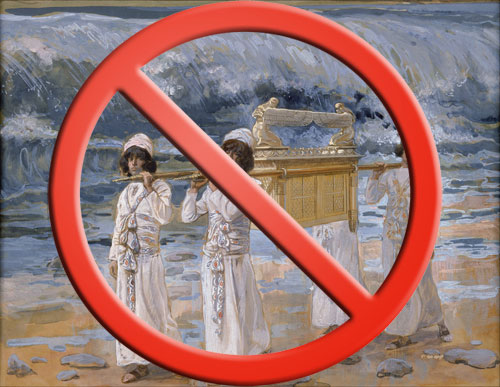 The Ark of the Covenant is shown being carried in public for all the world to see, but the Ark had to be covered when it traveled.

(Numbers 4:4) This will be the service of the sons of Kohath in the Tent of Meeting, about the most holy things, 5. and when the camp sets forward, Aaron and his sons will come and they will take down the covering veil and cover the Ark of Testimony with it, 6. and will put on it the covering of badgers’ skins and will spread over it a cloth wholly of blue, and will put in its poles.

There are many pictures of the Ark being carried, but not even the Levites who carried the Ark were permitted to look at it. Only Aaronite priests could see the uncovered Ark, and only on Yom Kippur or when the LORD* ordered the Tabernacle to move. There is no mention of covering when the Ark was in the house of Abinidab, and then the house of Obed Edom, or on its travels before being placed in the tent in the City of David. There is no way of knowing if the sons of Eli covered the Ark before taking it to the battle, or if it was covered when sent back to Israel by the Philistines. In 1 Samuel 14:16 Saul called for the Ark to come to the battle, but there is no way to know if the Ark was taken to the battle, because of the element of panic immediately following the call for the Ark.