Bible Myth 3: All of Judea was taken to Babylon 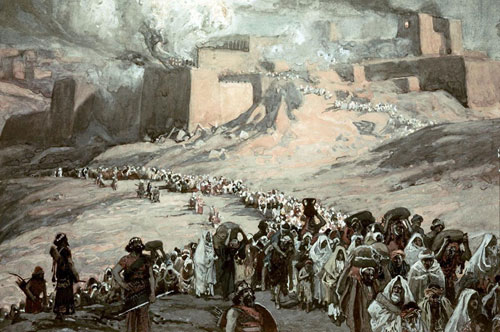 The Flight of the Prisoners: James Tissot

All the People of Judea were taken to Babylon by Nebuchadnezzar in the Captivity is a common misunderstanding.

Jeremiah 24:1. The LORD* showed me and, behold, two baskets of figs were set before the Temple of the LORD*, after Nebuchadrezzar king of Babylon had carried away captive Jeconiah the son of Jehoiakim king of Judah and the princes of Judah, with the carpenters and smiths from Jerusalem, and had brought them to Babylon.

All the leadership was taken and certain skilled artisans, but the bulk of the population was not taken. Shopkeepers, clerks, farmers, and others stayed behind.

(excerpted from the One New Man Bible Companion)